Bassari's exploitation and exploration permits cover a large area of approximately 312km2 in a central location of the highly prospective Birimian belt of the Kedougou-Kenieba Inlier. The Moura and Sambarabougou permits are located in the Tambacounda region of south-eastern Senegal, 700km east of the capital city of Dakar, and approximately 70km north-east of the town of Kedougou. The north-east boundary of the Moura permit is along a portion of the Faleme River which forms Senegal's border with Mali.

The Moura permit area of 184km2 covers a very prospective part of the Diale Formation of the Birimian Belt adjacent to the Senegal Mali Shear Zone (SMSZ) which hosts the large Loulo and Sadiola gold operations in nearby Mali.

Moura has been subject to exploration by the United Nations, the French Government (BRGM) and a number of private mining groups, including Bassari Resources Senegal. BRGM had identified 30 gold anomalies for follow up exploration. All of these anomalies have been located by Bassari Resources Senegal and a detailed geochemical sampling program completed. Infill sampling by Bassari Resources Senegal geologists has identified at least 7 extensive NE-SW trending anomalous zones, centred around Kawsara and Kawsara North (5 km strike length), Benajiggi (4 km long), Konkoutou (2 km long), Yoroya (1.5 km long and open to the north), Sambali and Bountou. A limited drilling program has confirmed the identified anomalous zones.

Moura is considered a a highly prospective permit for detailed further exploration and development.

At the Konkoutou prospect, trenching by UNDP (Soviet) geologists discovered 10 small isolated auriferous zones. Follow up sampling by the Bassari geologists confirmed the prospectivity of the area.

Bassari's geologists logged and sampled 49 pits. All of the pits exposed quartz veins and quartz stock works. The abundance of pits allowed five profiles to be selected and constructed across the Konkoutou Hill and valleys to the east and west. Significant gold mineralization was located in all five pit profiles. The mineralised zones suggested there could be a major east-dipping shear zone developed within the Konkoutou prospect. This zone was evaluated by RAB geochemical drilling and returned 20m @ 1.7 g/t Au. Konkoutou is a priority drilling target for Bassari.

To date drilling has intersected gold mineralization over a strike length of some 450 metres.

More recent drilling results from the November 2016 RC and DD drilling of 2,922 metres include:

Consulting geologists have reported that Konkoutou has the potential to develop into a major gold deposit. 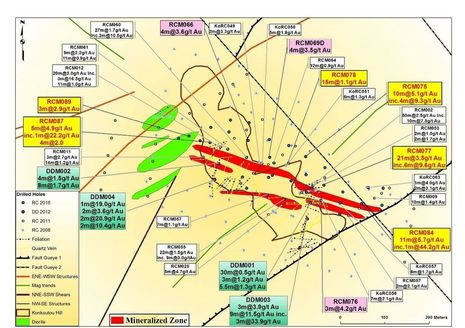 The Konkoutou North prospect (approximately 2km north of Konkoutou) comprises a low hill made up of massive and locally brecciated milky quartz veins. The best results from trenching work (quartz vein channels) by UNDP geologists were 75 g/t Au and 110 g/t Au over widths of 0.5 metres. These high-grade results have been reconfirmed by Bassari geologists.

Located 2.5km east of Benajiggi, the Konkoutou East prospect is defined by soil geochemistry over a 0.5km strike. Gold-in-soil values above the 25ppb contour peak above 600ppb. Yoroya is a RAB and RC drilling target.

Kawsara is located 3km north of Yoroya. Kawsara and Kawsara North prospects define a NE trending zone of strong soil geochemistry over a strike of some 5km. Gold-in-soil values peaks above 800ppb. Trenching by Bassari has concentrated on a zone over a strike length of 800m and values returned included 3m @ 3.4 g/t Au, 2m @ 5.5 g/t Au, 5m @ 5.7 g/t Au and 3m @ 3.4 g/t Au. Kawsara is an RC drilling target.

Covers a very prospective part of the Diale Formation of the Birimian Belt adjacent to the Senegal Mali Shear Zone (SMSZ) which hosts the large Loulo and Sadiola gold operations in nearby Mali.

The Sambarabougou permit is located within the Palaeoproterozoic Birimian volcano-sedimentary sequences and the intrusives of the Diale Formation. Early-stage exploration near the southern margin of a small syntectonic granite, the Sambarabougou Granite, led to the discovery of the Makabingui gold deposit , which comprises a large number (>30) of generally shallow east dipping lodes and quartz veins hosted by a gabbroic intrusive and contact metasediments. This structural setting is deemed highly prospective by Bassari geologists.

The MTZ is viewed as a long acting and wide zone of crustal deformation which acts as a primary regional and crustal scale control for the existing gold deposits and gold mines in Mali and Senegal. Previous soil and termite mound sampling results clearly indicate highly anomalous gold mineralization along the length of the MTZ regarded as one of the primary controls of gold mineralization (refer Figure 3). 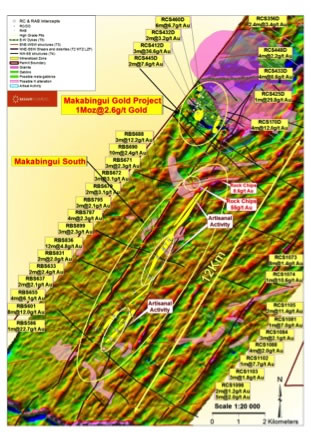 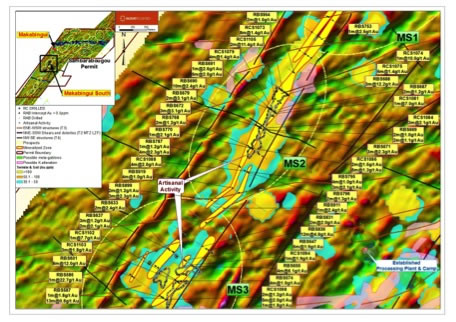 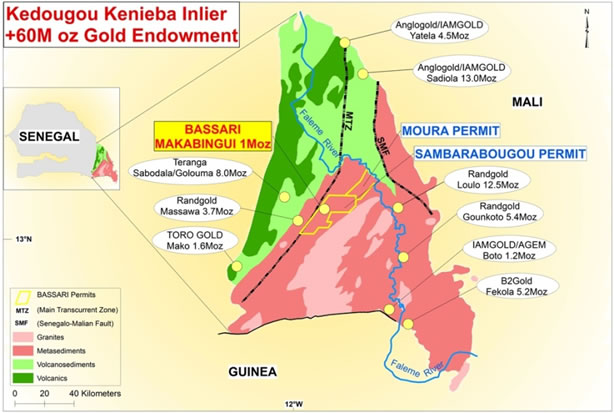 Located within the Palaeoproterozoic Birimian volcano-sedimentary sequences and the intrusives of the Diale Formation.